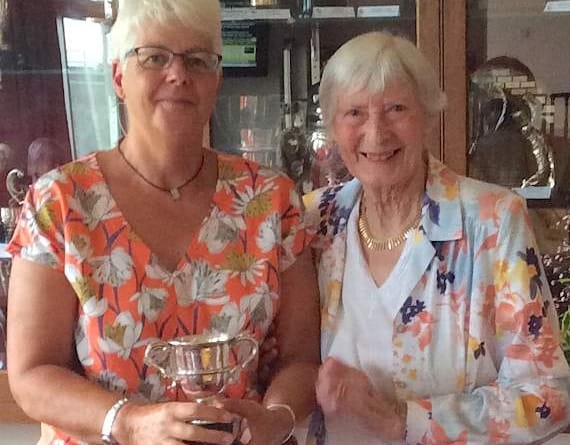 She is pictured receiving ing her trophy from president June Everitt after winning the club championship on July 21.

Two rounds were played in beautiful golfing weather and Jayne’s rounds of 80 and 84 gave her the best gross score of 164.

In the morning, players competed for the Clover Cup, with the field including ladies playing only one round as well as those playing the two rounds of thr championship.

The winner was Jill Hurley with 63 and the runner- up was Sarah Hill with 69.

On the first Thursday of July, a medal was played which included other competitions as well.

There was also a competition for all the medal winners of 2015, and the winner on countback was Kym Francis-Hill with 84.

The winner of the medal was Sandra Atkins with 67 and runner-up was Ingrid Swinburn with 73.

On July 14 the Leukaemic Trophy was played for and the winner of the stableford competition was Anne Oglesby with 39 points, with Sandra Atkins (38) second. There was also a raffle to raise money for Leukaemic Research.

Last Thursday the Seniors Cup for ladies over the age of 60 was won by Mary Beakes with 41 points, followed by Sarah Hill with 40.