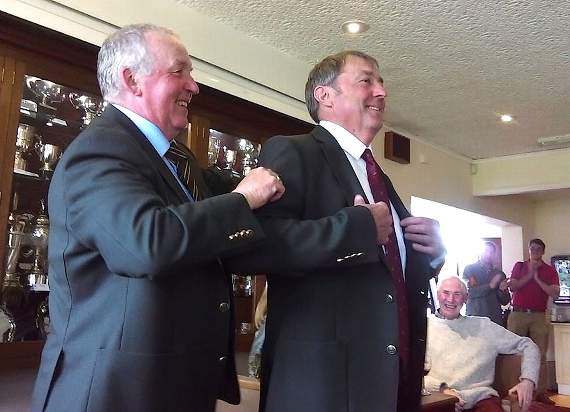 EASTER Sunday saw the annual drive-in and lunch to mark the inauguration of the Minehead and West Somerset Golf Club’s new club captain.

It followed the previous evening’s AGM, when outgoing committee members Paul Fullbrook, John Fulwell and Phil Arbourne were thanked for all the time and hard work they have put in over the past years.

Outgoing captain Phil Bowden was thanked for his year’s captaincy and was presented with his past captain’s tie by new club captain Dorrien Bickerstaff.

In a moment of sunshine on Sunday, Dorrien drove into his captaincy in the customary way with ladies’ captain Jenny Holland and the seniors’ captain Dave Chidgey in front of club members, friends and family.

That was followed in the clubhouse by the outgoing captain presenting Dorrien with his club captain’s green jacket.