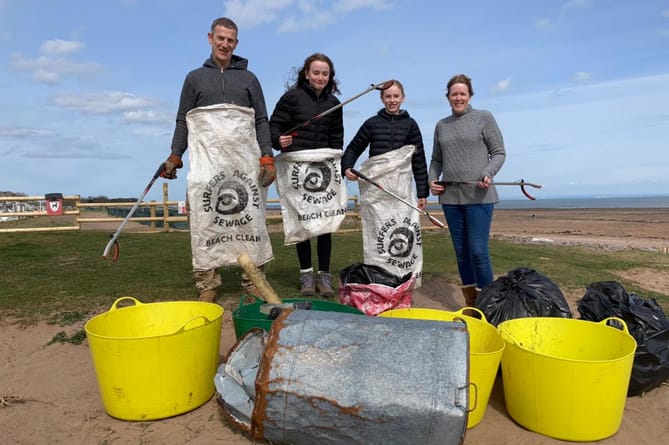 Beach clean up (Surfers Against Sewage )

It recognises ongoing efforts by businesses and communities across the region to turn West Somerset into a plastic-free hotspot and start reducing the impact of single-use plastic on the environment.

Peter Hoyland works at the National Park Centre in Dunster and took on co-ordinating the National Park-wide campaign last year, just months before Porlock Vale became the first parish in Exmoor to be awarded plastic-free community status, joining nearby Minehead and Watchet.

Registering with the SAS Plastic-Free Communities movement, Peter pulled together key organisations and businesses across the National Park to put in place a five-point plan which includes a community-led steering group, SAS Plastic-Free Schools education programme, getting local council commitment and working with local businesses, organisations and community groups to spread the word and minimise the amount of disposable plastics they use.

Peter said: “The support from the community on Exmoor and the surrounding area has been tremendous. We now have a network of more than 40 businesses and organisations across the National Park committed to reducing and removing our reliance on single-use plastic, as well as helping us to spread the plastic free message to others in the local community and people visiting our beautiful national park.”

From coffee cups to plastic stirrers, packaging to household plastics, more than 20 organisations across Exmoor have registered as Community Business Champions, pledging to remove at least three items of single use plastic from their businesses. Some have gone much further, cutting it completely from their operations.

Among them are Roadwater Community Shop (pictured), which has found simple ways to cut single plastic use from their trade, such as selling milk in refillable bottles, loose fruit, plants donated by people in the village in reusable pots and signing up to be part of a network of water refill stations.

A further 20 organisations and groups have registered as Community Allies, pledging to further help spread the word about reducing reliance on single use plastics. This includes local beach cleans, which have been attended by around 500 people, with many more now actively participating in litter picking in their spare time.

Another focus has been on creating a network of water refill stations to remove the need for plastic bottled water. There are now 12 refill stations on Exmoor which can be located using the Refill App, with a call out for more to register, particularly along the routes of Exmoor’s popular long-distance walking trails such as the Coleridge Way, the Two Moors Way and the Southwest Coast path.

Peter added: “I’m delighted that Exmoor is the first national park to have been awarded Plastic-Free Community status and this would not have happened without a concerted effort by many, including support from the other three local Plastic-Free Communities in Porlock, Minehead and Watchet and Somerset Wildlife Trust’s Brilliant Coasts initiative.