Mum kicks the habit - on TV 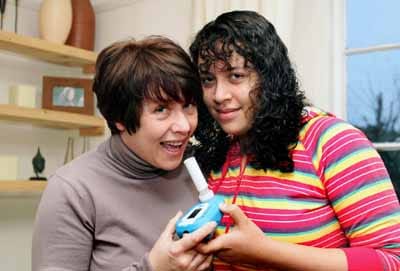 HARDENED smoker Michele Markham has kicked her 30-year habit thanks to the efforts of her teenaged daughter and a starring role in a new television programme. Michele, who lives in Porlock, was nominated by 14-year-old Isobel to take part in The Smokehouse, a series commissioned by the BBC and CBBC in which children convince their parents to stop smoking. The pair were selected as one of just six families in the country to feature in the series, which will be shown on BBC1 towards the end of February. The ten 30-minute episodes chart the ups and downs of the smokers and their children during a three-week residential stay in a large country house in Surrey. Michele, a mature student who hopes to train as a primary school teacher, this week described the experience as "life changing." Meanwhile Isobel, a West Somerset Community College pupil, thinks her non-smoking mum is "brilliant." "I started smoking when I was about 12 or 13 and, although I've had several attempts at giving up, I've never managed it," said Michele. "I smoked around 20 a day but I had been promising Isobel all her life that I would stop. When she came home from school with a newsletter in which there was an advert looking for people to take part in this programme, I agreed she could put my name forward. "But I never thought for one moment we would be chosen." Michele and Isobel heard they had been selected early in December - just days after applying - and on January 1, with the permission of the community college, they headed off to Surrey. The three-week intensive campaign consisted of a series of challenges, fitness and motivational sessions and plenty of health warning 'wake-up' calls. With an assault course in which Michele found herself chest high in cold water and work tasks featuring the danger zone coffee break when smokers would traditionally light up, the going was anything but easy. But one of the most difficult aspects of the experience was seeing Isobel on the house 'big screen' explaining just why she so desperately wanted her mother to quit. "She said she wanted me to be around in the future," said Michele. "Whenever she wanted a cuddle, I'd always say wait until I've finished my cigarette. "Isobel thought my cigarettes were more important to me than her. It was really emotional." The heart wrenching screenings took place on the smokers' second day in the house and immediately afterwards they were asked to hand in their cigarettes. Although they were allowed to use nicotine patches and other 'aids', Michele has not had a cigarette since. "I'm absolutely amazed at just how successful it's been. It was hard but I'm so pleased to have done it," she said. "In my heart I always promised myself that I would give up but in my head I never thought I would be able to. "I feel incredibly lucky to have had this experience and I think I would have carried on smoking if I hadn't had the chance to do this. "Isobel and I have always been very close but the bond between us is even stronger now. She knows I've done this for her, for my parents and for myself, and I've got a completely different outlook on life now." Photo: Steve Guscott