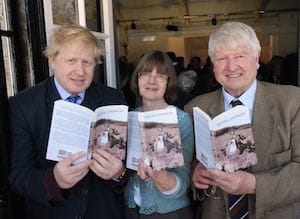 IN 1951, Buster Johnson exchanged her swish life of domestic servants and bridge parties in Surrey for a remote and spartan farm in the heart of Exmoor.

Ten years on, she wrote a first-hand account of her life on the farm but she died in 1987 without having published her book.

Now her daughter, Birdie, has done so on her behalf. Alas Poor Johnny is out in paperback and as an e-book.

The foreword is by the author's grandson, Boris, who said: "It is wonderful to hear her voice again."

Buster moved to West Nethercote with her husband Johnny, their four children and pets: "Few people can have been less qualified than I was to become a farmer's wife. Town bred, I had been groomed by my French mother for the diplomatic arena."

Her account of their life and of farming on Exmoor in the '50s is told with a strong sense of drama and of the absurd.

The void left by her lost cultural and social pursuits becomes filled by the minutiae of everyday life. Above all, the animals take the place of absent friends in her affections, their personalities permeate the book.

There is a small but strong supporting cast, including busybody Mrs Stevens at the next door farm, Arthur the ex-cowman who moves with them from Surrey and Alby the rabbit catcher, who plays the mouth organ and dances.

Threading through all this is Johnny. Their relationship is the heart of the book.

Alas Poor Johnny should appeal to anyone who is interested in Exmoor and old farming practices, who loves the countryside and animal lovers, or is just in need of cheering up.

Pictured at book launch on Easter Monday at Dulverton Town Hall are, from the left, Boris, Birdie and Stanley Johnson, the author's son.