After six years and £6.93 million the Museum of Somerset is unveiled 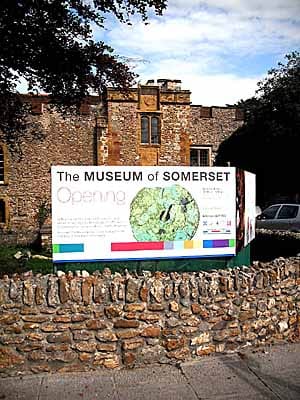 A familiar sight from the outside ...

THE wraps have come off 400 million years of Somerset history with the official opening of the county's newly revamped Museum of Somerset.

After six years of hard work, 2,000 metres of bubble wrap, 1,700 plastic crates and the removal of some 100,000 objects, the museum was reopened yesterday (Thursday) by Professor Mick Aston from Channel 4's Time Team.

The £6.93 million refurbishment has created 40 per cent more exhibition space within the ancient walls of Taunton Castle and means thousands of additional artefacts can now be displayed.

Gone are the small rooms and simple balcony which once housed a somewhat cramped collection of historic relics from all corners of the county.

With a reconfigured Great Hall, complete with six, floor-to-ceiling modern glass cabinets, a new mezzanine level and hi-tech interactive displays, the museum is a triumphant blend of old and new.

The journey around the museum takes visitors on a complete tour of Somerset's natural, historical and archaeological past.

The county's history is literally carved into the very fabric of the new-look collections thanks to a magnificent Tree of Somerset, hewn from oak found at Aisholt on the Quantock Hills by award-winning tree sculptor Simon O'Rourke.

The tree depicts key events over the centuries and provides an atmospheric and sensory experience through touch and sound at the entrance to the main hall.

And West Somerset's history has a well-deserved and significant part to play in the story that envelops the visitor.

An ancient tomb from Culbone complete with skull and bones, Civil War relics charting Edmund Wyndham's siege of the castle and Kilve's famous, complete plesiosaur skeleton are just some of the exhibits on show from the district.

In fact, Stogursey is a name which crops up around every corner and the area appears to have been a real gold mine for archaeologists over the centuries.

However, other parts of West Somerset have also yielded treasures, some of which are on display for the first time, such as a 1530 beech wood pew end from All Saint's Church in Wootton Courtenay.

Churches across the district dominate the museum's religious relics with a grand display of silverware from Winsford, Lilstock, Exton and . . . yet again, Stogursey!

Talented East Quantoxhead artist Sarah Biffin, who was born in 1784 without arms, has a whole cabinet dedicated to her miniature paintings.

It is believed to be the largest collection of her work on display in the world and includes a colourful self-portrait.

Then there is the poor unfortunate Sheriff of Somerset, Edward Hobbes of Stogursey, who held what should have been a coveted role in 1685 - the year of the ill-fated Monmouth Rebellion.

His face stares out of a display board within a newly-created Rebellion Gallery in the castle's undercroft.

The space was formerly the castle prison and Sheriff Hobbes had the unenviable and gruesome task of arranging the executions of those sentenced to death by the infamous Judge Jeffreys.

Sheriff Hobbes also had responsibility for ensuring there were sufficient cauldrons available to boil the heads of the condemned men - all in only one year of service.

The gallery echoes to the last words of the prisoners as actors can be heard reading their final letters to loved ones before their deaths.

It is one of many clever touches around the museum, which makes good use of both sound, light and images to bring history to life.

Cauldrons and skillets hang from the ceiling of the Making Somerset exhibition gallery, while thunder rumbles in the background to convey the conflict and struggle within the county in the Middle Ages.

The Reflecting room features quotes from a host of West Somerset characters over the centuries, from Coleridge and RD Blackmore to Dunster's well-known resident Hilda Parham.

The district's coast and countryside takes centre stage in a newly-commissioned aerial film of the county and its inhabitants star in videos shown in the themed galleries of Gathering and Speaking Your Mind.

The Somerset Light Infantry retains its pride of place within the castle, but with new exhibits, hands-on displays and even dressing-up clothes for youngsters keen to take on the role of soldiers past and present, from, Rorke's Drift to Afghanistan.

The museum has taken a further step forward into the 21st century by installing a lift, creating a cafe and introducing a gift shop showcasing some of the county's finest products.

County heritage officer Tom Mayberry, who has been pivotal in turning the dream into a reality, said: "It has been wonderful to be part of a project like this.

"I am proud of what we have achieved."

As part of a special opening weekend extravaganza, there will be a tudor-themed family fun day at the museum tomorrow (Saturday) and music from the Lazy River Jazz Band from 2pm to 4pm on Sunday.

From next week, the museum will be open from 10am to 5pm, Tuesday to Saturday and on Bank Holiday Mondays - and, best of all, admission is free.