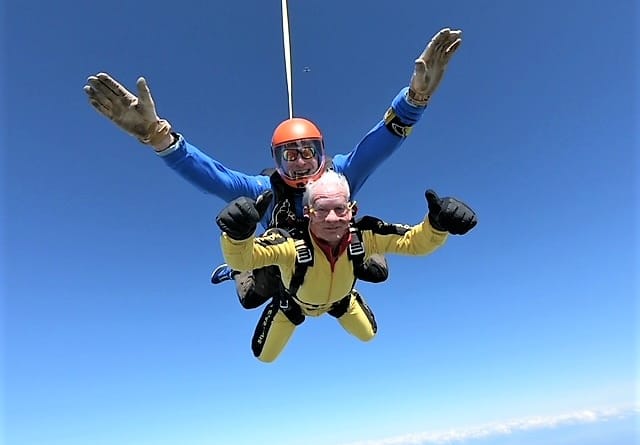 WHILE most people might decide on a slap-up meal or a glass of bubbly to mark their 80th birthday, Ray Brooker opted to fall out of the sky at 125 miles an hour for a guide-dog charity, writes Robert Barron.

The plucky fund raiser from Alcombe who has a severe sight impairment, took the plunge while flying over the Blackdown Hills, and thanked his disability for “making it easier” to jump.

“Compared with the other five parachutists in the plane with me, I had the advantage of not being able to see the ground,” he said. “So I was not scared at all. They opened the door, I felt the wind rush in and the next thing me and the chap I was strapped to were hurtling to the ground at 125 miles an hour.

“It was absolutely brilliant. The only shock was after 60 seconds the main chute opened and our speed reduced suddenly to 10mph. I thought I would have to change from singing bass to soprano in my choir!”

Ray, who took early retirement from the Royal Navy before moving to Alcombe with his wife Sandy, has helped raise thousands of pounds for the Guide Dogs charity.

Most fund-raising has been through the Alcombe-based choir Singing for Fun. But significant amounts have been raised by collections for the same cause at local superstores and through a tea party at Old Cleeve Church Rooms.

Ray expressed thanks to the Singing for Fun leader Sara-Jane Cross and his facilitator Fiona Toms. “Because I can’t see well enough, Fiona sorts sorts out all the communications for me.

Ray has his own guide dog, Jagger, so named because the dog’s dad is called Mick. Ray has appealed to other local guide dog users to bring their guide dogs along to fund-raising events. “People who are donating take so much more notice if they can make a fuss of a guide dog than if here’s just a load of us rattling tins,” Ray added.

Ray says his next birthday challenge will be taking a wing-walk on a 340km-an-hour Cessna aircraft.