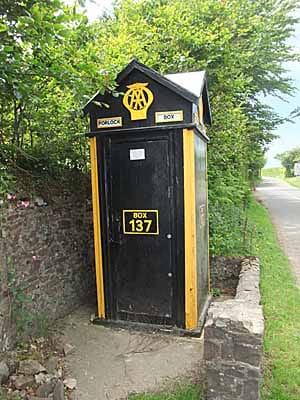 A TREASURED icon of England's motoring heritage that is now a West Somerset landmark is being given a much needed makeover. The AA patrol box at the top of Porlock Hill has been removed for refurbishment. But before it was taken away, AA bosses had to secure special permission to carry out the work offsite as the box is a designated grade two listed building. The Exmoor National Park Authority gave the company listed building consent to remove it but AA spokesman Gavin Hill said it would be returned as soon as possible. "As a local landmark, we hope to have it fully restored before the summer holiday season," he said. "AA boxes started out as shelters for patrol and were a common sight on the roads, eventually number around 800. "There are now only 19 remaining AA wooden sentry boxes on public roads, either maintained by the AA or respective local authority." The first roadside box appeared in Surrey in 1911 and they were initially used as shelters for passing AA patrolmen. By 1920 all AA members had keys for the boxes and were able to use them to make a free phone call if they had broken down. However, the arrival of mobile phones rendered them all but obsolete and the AA began phasing them out in 2002, with only the ones that are listed surviving. The Porlock Hill box has been a familiar sight for motorists for decades and was even used to break the news of the Lynmouth flood disaster in 1952. Last June it fell victim to the weather when strong winds blew open the door and ripped it off its hinges.