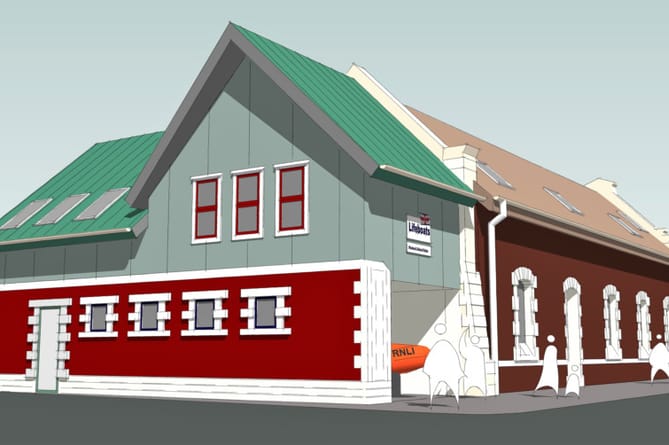 AS building work begins, a number of ’significant’ individual donations have been made towards the £1 million cost of upgrading Minehead’s historic lifeboat house, an RNLI spokesman said this week.

Three major donors have already come forward to offer their support for a scheme which will deliver a range of much-needed improvements to the 120-year-old building. The size of the gifts has not been revealed but the spokesman said they would contribute perhaps half the money needed.

Among them are Andrew and Lynn Richmond from Surrey who chose the RNLI as the recipient of a lifetime donation. Their gift will fund the station office and a dedicated mechanic’s workshop space.

Andrew said the RNLI was largely run by volunteers who were prepared to go out at a minute’s notice in all weathers to save lives and who needed all the support they could get.

"We chose to support the Minehead appeal because we had enjoyed holidays there and loved the area," he said.

"We believe our donation will help make the Minehead crew operate in a better and more efficient way and will reduce the all-important launch times. While we have never had to call on the RNLI it is reassuring to know that they are on call should we ever need assistance."

Remodelling and enlarging the station - a listed building - will reduce response times and provide vastly improved facilities for the volunteer crew, who operate a 24-hour rescue service and respond to between 30 and 40 emergency calls a year along more than 30 miles of the Somerset and Devon coastline from Hinkley Point in the east to Lynmouth in the west.

A local appeal fund has been opened with the aim of raising a quarter of the building cost from within the West Somerset community. While Covid restrictions have so far prevented the organising of any large-scale public events, several fundraising initiatives are already under way including plans for a Lifeboat Day and attendance at other local events.

But Minehead RNLI chairman Richard Newton said the three large donations would add huge impetus to the race to reach the local target.

"They have come from individuals who have read about the conditions the crew currently have to cope with at the station and want to make a significant gesture towards ensuring the improvements are put in place with the minimum of delay," he said.

"We are extremely grateful to all three for their generosity."

Both Minehead’s lifeboats - an Atlantic 85 rigid inflatable and a D-class inflatable - are state-of-the art craft but facilities at the station itself are not fit for purpose and there is an urgent need for more space.

Female crew members currently have to get changed in a storage cupboard, there are no showers and the crew training room is far too small to accommodate all the 30-plus crew at once.

Remodelling will see the station extended westwards onto land the RNLI has bought from the local authority, with the ground floor extension enabling the creation of a crew changing room with showers and a separate female crew changing space, a dedicated mechanics’ workshop and a souvenir shop.

But one of the most important improvements will be the provision of a full-length boat hall at the rear of the building which will allow the D class - normally launched through the harbour - to remain permanently hitched to its tractor, enabling the crew to shave minutes off its response times.

"Minehead people really appreciate the dedication of crew members who are prepared to put their own lives on hold to save the lives of others," he said.

Anyone wishing to support the appeal can donate and fundraise in a number of ways.

They can visit the Justgiving page at https://www.justgiving.com/campaign/Minehead-RNLI-Lifeboat-Station-Appeal or they can make a direct donation to the appeal by contacting the fundraising team at Minehead RNLI who can provide online banking details or a postal address for donations. Phone Liz Escott on 07877 952975.

Those who want to hold a fundraising event or activity can set up their own justgiving page by visiting www.justgiving.com and clicking on the ’Start Fundraising’ button.